A very gruelling day today we did 7.6 miles and 17 locks in 7.7 hours. I forgot to say yesterday that we met an American couple travelling in the opposite direction to us, they had an over sized inflatable dingy that was a little wider than a conventional narrow boat which meant that it squeezed precariously into the lock with an accompanying narrow boat. We had visions of its over-sized male occupant pinging out of the lock as the pressure was released with the opening of the lock gates, unfortunately this did not happen. They were travelling up the grand union and had a tarpaulin cover which they used at night like a tent. I don’t know how far they were going, but I guess if we can take our narrow boats over to Florida they can bring there inflatable’s over here, still they seemed to be having a good time.
We managed to bring the road traffic to a standstill for about 20 minutes when the people we were travelling with broke the key operated swing bridge. It turned out it wasn’t their fault as the Waterways people discovered that there was a problem with the motorised equipment and could only operate the bridge manually. So the bridge was closed for canal traffic and would only be opened four times a day until it was repaired. Still we were on the right side of the closure and heading south.
There is something perversely satisfying about travelling under the M25 at a little bit over the speed of the traffic above. We eventually moored up at the bottom of our road in Croxley and packed up the food for our dinner and went home to watch Spain deservedly beat Germany in the Euro 2008 final.

So we are back at home now making final preparations for our REAL departure, probably next week.

Well the day has finally arrived for us to leave the marina and it feels very strange that this will be the last time for a while that we will be at Cowroast, well we will be back on Monday to pick up the car. So here we are untying the rope and about to set off. 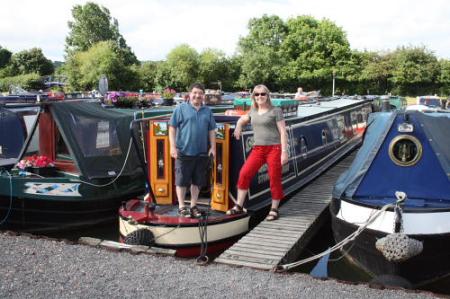 Alan and Frances untying the boat

And now making our way under the elegant narrow entrance to Cowroast to begin our big adventure. 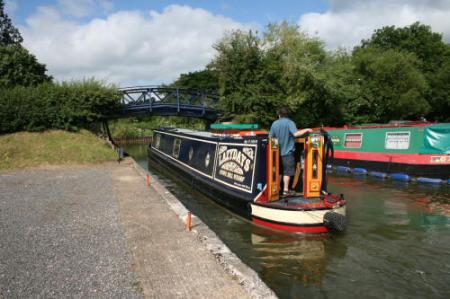 We had picked up our son from Winkwell, 5 miles from Cowroast and less than 15 minutes by car. He had left his car in the pub car park and would travel with us through Berkhampsted and recover it later in the day. The road runs parallel to the canal but you would never know it from the road as the canal is swathed in trees as it meanders through urban and industrial areas oblivious to the outside world. Hence the attraction, it is like going back in time although we did discover that modern living was encroaching upon the serene and quiet canal side in the form of vandal padlocks on all of the lock paddles going through Berkhampstead, these needed to be opened by a waterways key provided to everyone with a license.
Sensonics, my place of work, is on route to Berkhamstead about two miles south of Cowroast and it can just be seen through the trees, it is the building with the blue sign. The canal front is going to be landscaped and provided with a bench in memory of Doreen; a charge hand with the company for years who passed away last year. 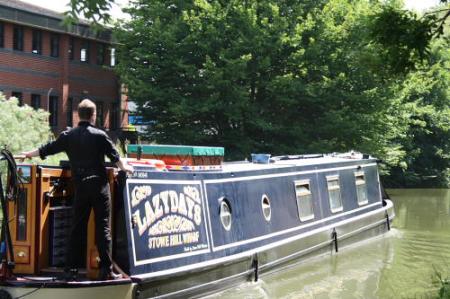 A few more locks and we were in the centre of Berko (as it is locally known) where we stopped for lunch and a wonder round town while Mick caught up with some much needed sleep. It was market day so the place was bustling.
We set off at two and arrived in Winkwell at five, eight locks later.
It had been a very enjoyable first day beautiful weather and a pleasant stroll down the canal as Mick steered the boat all the way. We had gone through 15 locks and it had taken 5 hours of travelling time to cover the 5 miles that had taking less than 15 minutes by car, our new pace of life.

At the end of  June 2008 we are going off on our narrowboat Lazydays to explore the canal system of England. I will be putting up here the preparation work that we have done to the boat to help us with this journey in the form of pages on the right, and once we get going I hope to keep a journal of our journey along the cut.